How is it that certain clothing styles just seem to have staying power… always looking chic and timeless, yet utterly current decade after decade?  Each era may put its own spin on the original pattern, but the fundamental elements remain the same.  The “shirtwaist dress” has to be one of the best examples of this, which also happens to be one of my personal favorites too.  I find the history behind the shirtwaist dress and its emergence into popular culture to be just as interesting – and downright American – as the dresses themselves.  Let’s explore, shall we? 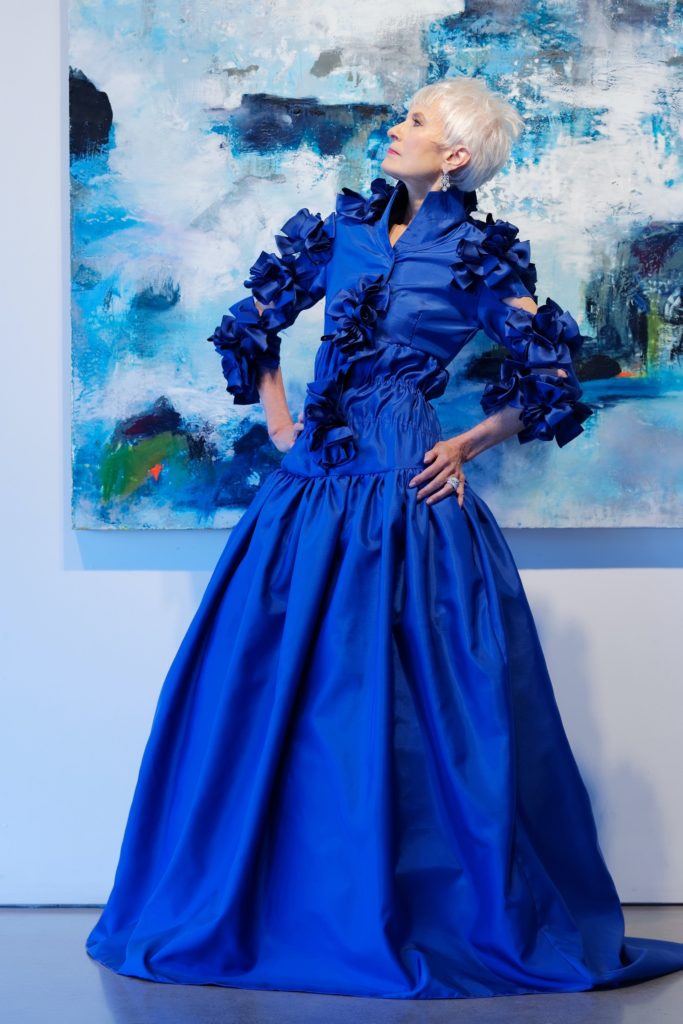 According to FIT (hey, that’s my alma matter!) and the Wall Street Journal, the origins of the shirtwaist dress actually began with the “shirtwaist top” (aka what we now know as the “blouse,” originally fashioned from men’s shirts), which emerged in the 1890s as a uniform for the “New Woman, who demanded the same educational and professional opportunities as men. Rather than wearing fussy dresses bedecked with yards of the over-the-top trim beloved by Victorians, she preferred progressive, menswear-inspired clothes.” (via The WSJ, June 15, 2018)  Coinciding with the advent of mass manufacturing, and thus ready-to-wear fashion, the shirtwaist top, along with skirts and other separates, were easy to produce, as they did not require precise, custom fits – making them a hit with working and middle-class women (via LovetoKnow).

Shirtwaist dresses found in a 1944 catalog. Image via UploadStars

By the 1930s, the shirtwaist-top-and-skirt combo merged to become the shirtwaist dress, with designers such as Claire McCardell and Christian Dior making their own versions.  Technically speaking, a shirtwaist dress is defined as a dress which features a shirt top, combined with a skirt bottom.  Most often, and especially in the 1930s – 1950s, the top part buttoned up, though oftentimes the buttons extended all the way down the skirt for a look that was both decorative and functional (via The Vintage Dancer).  Typical shirtwaist dresses feature a notched, pointed collar, though experimentation with collar styles, waists, skirts and sleeves began early on.  Dior’s post-WWII “New Look” in particular promoted a highly feminized take, with a cinched waist and full skirt lined in crinoline, whereas designers such as Yves Saint Laurent and Halston later in the 1970s preferred more relaxed styling. (via Wikipedia) 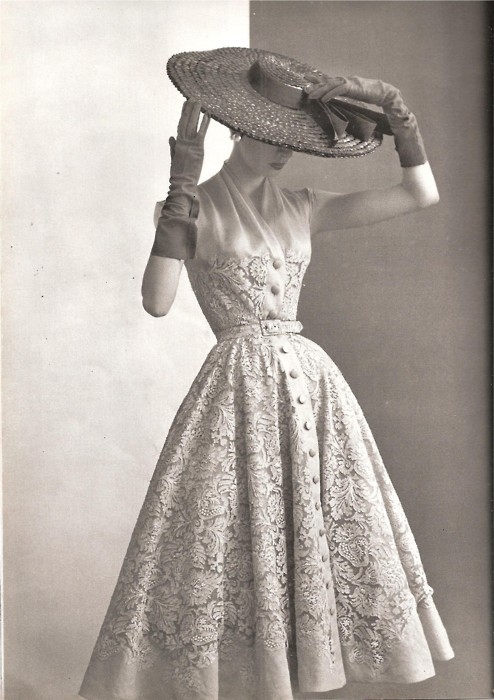 These days there are many riffs on the design… my own included.  I love the balance between the feminine and masculine that this classic design offers.  And – always a fan of the unexpected – I especially love making a shirtwaist dress in a formal fabric such as a silk taffeta, which gives this traditional ‘day dress’ a glamorous evening look as well as elegant structure.  My version also tends to forgo the buttons, instead opting for a clean, open V front.  Modifying with a kimono sleeve or extra ruffle detailing also lends some intrigue. 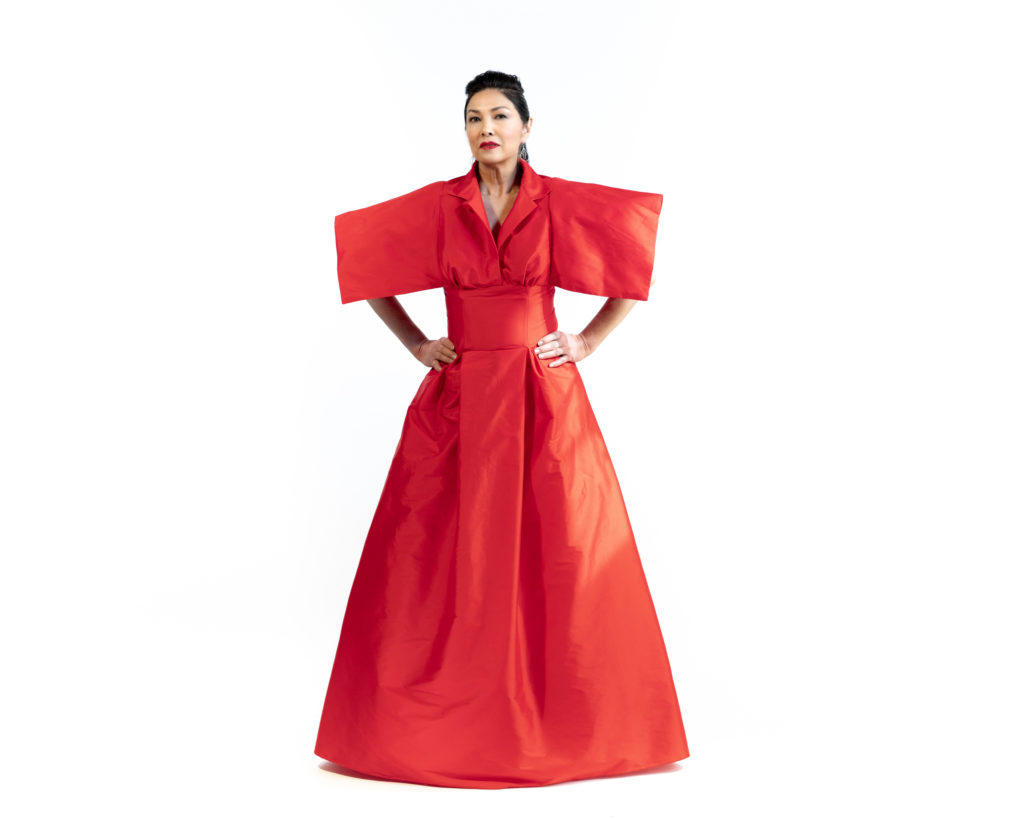 Aside from its storied history, what makes this style a fan favorite time and again?  I believe it’s the fact that it’s such a flattering style on any body type.  It’s comfortable and freeing, yet can be cinched in the middle for an hourglass effect.  It’s functional and simple, yet the possible iterations are endless really.  It’s a thoroughly democratic style, and there’s something just fundamentally American about that. 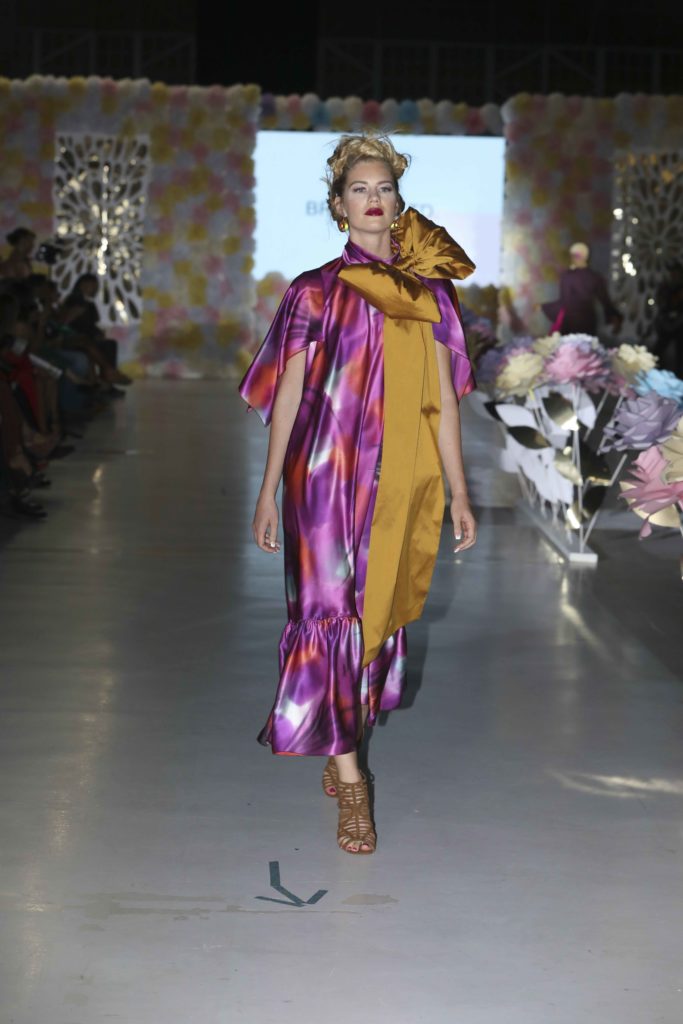 My modified take on a shirtwaist dress, in flowing silk satin. As seen at Latin Fashion Week Colorado. Photo by Ricardo Mejia.

Looking for your own take on the classic shirtwaist dress, or another style?  I live for designing unique couture gowns and other creative, bespoke ensembles.  If your next holiday party, wedding or other special occasion calls for standing out in a one-of-a-kind dress, please think of Brooks LTD.  Visit the Contact page of my website and we can schedule a time to sit down and discuss your needs.